One of the earliest clues as to when grapes were first grown beneath the castle walls comes from the Diploma of Emperor Conrad II to Odorico, Bishop of Brescia of 15 July 1037 in which jurisdiction was granted by the ecclesiastical authority over Mount Denno now mount Maddalena attached to the Cidneo hill at the time.

The first clear description of the cultivation of vines in the city is given by Archetti:: “Even the slopes of Cidneo Hill facing midday and morning, that is the ones better exposed to the sun’s rays were rich in vineyards, unlike the way they appear in common iconography as barren and bare. Along the streets leading to the castle, there were rows of vines in narrow terraces or directly on the slopes, “apud viam” – as stated in an inquisitio of 1251 – which led to S. Pietro in Oliveto or again near Paganora Gate and near the old royal gate that led to the church of S.Stefano or to the east of the gate giving access to the castle”.

But it was above all on the eastern and southern side that the rows of low vines gave way to wide vineyards protected by hedges, blackthorn and high dry stone walls that must have been a wonderful sight. To the east of the castle a “clausum brohte de castro” was recorded where the vines were trained into “Pergole” or arbours, that is supported by poles (brothe) stuck in the ground and by trellises attached to the walls and enclosed by a hedge. 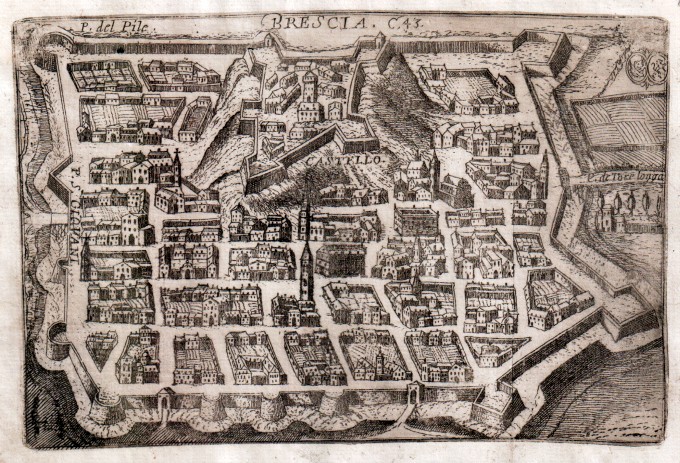 To the east of the castle was recorded a “clausum brohte de castro” where the vines were grown in bower, i.e. supported by poles (brothe) stuck in the ground and by trellis leaning to the walls and enclosed by a hedge”.

Recent history is easier to reconstruct thanks to documents belonging to the present owners: in the XIX century the Riccardi brothers set up a wine business that was awarded a prize at the International Exhibition of Vienna on August 18, 1873 and the gold medal at the Exhibition of Brescia in 1904. The business was then inherited by the Caprettis: in 1940 Mario took out the patent on the “Pvsterla” brand name to show that his wines were produced in the urban vineyard. With this name, the firm was awarded a gold and two bronze medals for three wines presented at the oenological competition of Northern Italy in 1953 and another gold medal at the oenological competition of Asti in 1966.

One wine enthusiasts who held Pvsterla in high esteem at that time was none other than Winston Churchill.

In 1973 Mario Capretti was forced by reasons of health to close the Pusterla winery and to convert the cellar for another purpose. He had still not realised his dream of acquiring the DOC certificate which he had promoted. In the years after his death, little by little the fields and the farmsteads of Ronco Capretti were sold together with the ex-cellar building itself. 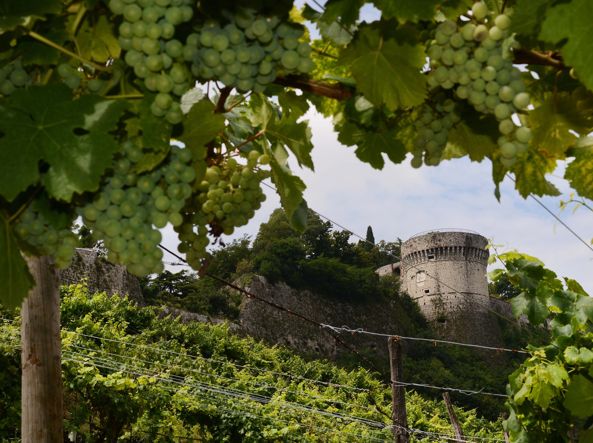 A different fate was to fall to the vineyard named “fondo montagnelle” on the slopes of Cidneo.

It was sharecropped by the three Castrezzati brothers who also brought the owner’s grapes to make their own wine until the end of 1990. The field was then managed by ITAS Pastori who kept it until St. Martin’s Day 1995. It is during this period that, with the agreement of the heirs to the Capretti estate the name “Pusterla” and the family coat of arms came back into use. It is also the first time that am attempt was made to produce a wine from Invernenga by using a withering technique.

The farm called Maria Capretti takes its name from the heir of the Capretti’s, historical owners of the fields located on the northern hillside of the Cidneo; these fields are mostly known as Pusterla vineyard, Castle vineyard or Ronco Capretti.

In November of 2011 the contract with the agricultural firm Pusterla expired. Maria Capretti resumed the management of the family vineyard.

After 40 years the family had returned to manage the vineyard directly, with the aim of maintaining and redeveloping it. Investments were made in the restoration of the terraces and in the planting of Invernenga vines, typical of the area.

Now production is mainly focused on wine and grappa, but not exclusively. As an old vineyard, it is also partly an orchard, so the winery offers preserves and jellies packed with fruits from old varieties of local Brescian trees growing amongst the vines.

In July 2020 Emanuele Rabotti, patron of the Monte Rossa winery expands his horizons to the heart of the city by signing the commitment to the Pusterla vineyard, the largest urban vineyard in Europe.